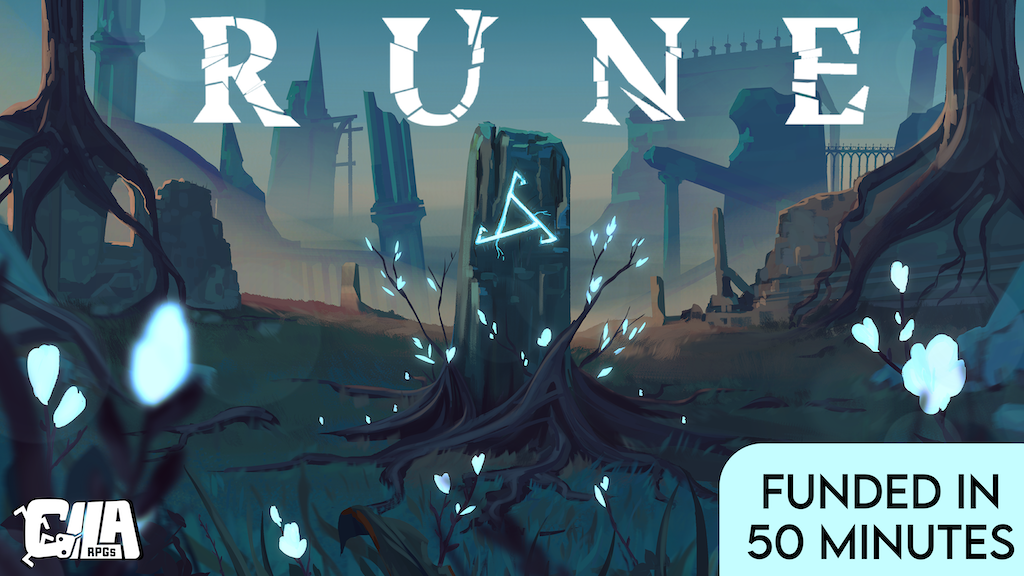 Latest Updates from Our Project:

A few people clicked that "request an update" button. As I mentioned in the last update, you can expect an update each month, sometimes more frequent as we get things moving.

The rules are nearly written, and will be sent off to Will Jobst for editing in early October. From now until the rules are returned, I'll be getting to work on finalizing the realms for the Realm Atlas.

October will be a busier month with bigger updates. This month I'm just staying focused with the writing. Look for updates on the editing and rules next month, where I'll hopefully have a non-layout version of the complete rules to share with you!

Real quick update here, mostly just a big ol' thank you to all of you for your incredible support. I cannot wait to get this game in your hands, so I better get to work!

Moving forward, you can expect one update a month. There may be some instances where I send them more frequently to show off some big news, but otherwise I stick to a once a month update system.

Like I said, I've got writing to do! Rules updating, and writing Realms are the next two big steps, and I'll be sharing progress with you on that next month.

Thank you all again so much. I really appreciate, truly.

$23,000 and over 1000 backers. That breaks all of my previous records, and hits a new milestone I never expected! You all are amazing.

As we approach the final hours, I don't have much to share. I got some feedback on The Island Realm I shared yesterday, so look for an updated version to get posted in that Drive folder in the next few days.

But, as we share this last day together as the campaign winds down, I wanted to send one reminder, and then recommend some other projects while I had your attention.

The signed copy tier, where I make you a fun RUNE item unique to you, is only available during the campaign. You won't be able to buy that later on Backerkit, or upgrade your pledge. So if you want it, make sure your pledge reflects that by the end of the campaign!

Print copies in general will be available as add-ons in Backerkit, and later on you can find them on my store where I sell all of my other printed games. So if you're all digital right now, you can always go printed later.

There are a number of amazing Kickstarters up right now, and I wanted to recommend a few!

Wicked Ones & Undead Awakening is a reprint of the absolutely incredible Wicked Ones, with an incredible expansion being printed alongside it. If you're not familiar with Wicked Ones, it's a Forged in the Dark game where you play as the baddies. It's always fun playing the monsters, and with Wicked Ones you get to do it while building a dungeon with your friends. It's a really unique take on the FitD system, and the books look gorgeous.

Sunderwald is a legacy RPG. Yeah, a legacy RPG. I'm a sucker for legacy board games, where you rip up cards, write on the board, and generally do all the things you're not supposed to do to a board game. Now you can have that experience with an RPG, messing with the book itself over the course of play! The art looks incredible, and the world seems nice and creepy. They need your help hitting the goal, so please consider backing!

Finally, Lilancholy is a game I am so excited for. It is written by the wonderfully talented John Battle, who has created some of my favorite games (Wizards and the Wastes, Iron & Lies, My Body is a Cage, .dungeon). John puts everything into these books, and each one is so special and unique. They truly are pieces of art on my shelf.

Ok, that's everything from me for now. We're approaching the end here. If you want to help us get one last big boost and wave, sharing the campaign with people is incredibly helpful. I'll be updating you once the campaign is ended properly about next steps. For now, go check out those projects I mentioned and consider throwing some support towards incredible indie RPGs.

We've reached the final 48 hours of the campaign! Our funding goal was hit back on day one, in the first hour, thanks to all of you.

Since then, the campaign has continued to grow, and I am so so so thankful for the support you have shown! RUNE is now my most backed Kickstarter in terms of number of backers. I'm still wrapping my head around that one.

As a thank you, I put together a little treat you all. Like I said in previous updates, I've been tinkering with the idea of mini Realms. These are lower stakes Realms that you could explore in a single sitting, or even during your lunch break. The best part? They fit entirely on a single sheet of paper! Just fold over the side flaps, and you have the intro and Realm rules on the front, map and point information inside, and a grid with enemy cards on the back!

Here are some pics of the first mini Realm, which I've made in both color and black & white.

Keep in mind I printed these are real crummy and cheap paper, so you can see through to the other side when you hold them up to light haha.

And now the Realm is yours! This Realm will only be available to you all, the backers of this campaign, and  I'll be making it available to my patreon supporters next month. Enjoy this bonus as a thank you.

PDFs for both the color and b&w versions can be downloaded from here.

Go explore the island, use the rules from the quick start, and get a little more RUNE in your life in these final hours of the campaign.

Got some fun stuff to show off today!

As a fun side project, I've started brainstorming how to make a smaller scale Realm on a single sheet of paper. Something that you could play during your lunchbreak. You can watch the video of where I start to put that idea together here:

I've been tinkering with it, and have some concepts drawn off I can share that don't spoil the Realm. I plan on releasing this to all backers when I complete it. Keep in mind, this isn't one of the 6 Realms that comes in the Realm Collection, this is a bonus!

Speaking of bonus Realms, the very talented Aaron Jolliffe has published his Coral Rock Realm on itch so that anyone can try it out. If you watched the actual play videos on the Kickstarter page, you might have seen me playing Aaron's Realm. Now you can try it for yourself! Check it out and give Aaron some love.

I've started up another play through of a fan made Realm. This one is the Cogrealm of the Mechanist, and it's been really fun so far. I posted Part 1 on YouTube earlier, and you can find it below. I'll be taking a break this weekend, so you can expect a continuation of the videos next week!

I'm going to be taking an internet break this weekend, which means I won't be doing much active promotion or work on RUNE. You all have made this campaign a huge success, and I'm so thankful. If you want to help boost the campaign over the weekend in my absence, I would appreciate it, and feel free to boost the announcement post on Twitter.